Although seafood exports reached US$7.9 billion, up 18 percent compared to 2013 and exceeded 13 percent of the US$7 billion target, in the eye of experts, 2014 is not a year of success for Vietnam’s seafood industry.
The reason is that the figure is partly thanks to the US$1 billion raw seafood imports in 2014. 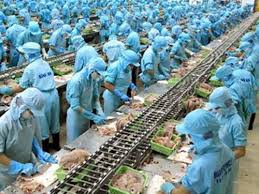 Imbalance
The year of 2014 reflected this situation clearly. The US$1 billion import of raw materials has helped promote the seafood processing industry’s development. However it also could lead to dependence on imported raw materials and the risk of imbalance between aquaculture and seafood processing capacity of the country, according to Dr Nguyen Huu Dung, Vice President of the Vietnam Association of Seafood Exporters and Producers (VASEP). Seafood exports could reach those figures thanks to the growth of shrimp which increased more than 32 percent, and crab nearly 22 percent, over the same period last year; while other staples such as catfish grew only 0.6 percent and krill 9.3 percent, particularly, tuna decreased by 9 percent compared to the same period last year.
In 2014, Vietnam imported raw materials from approximately 100 markets worldwide. Shrimp import accounted for the largest proportion (about 45.4 percent), followed by tuna (nearly 12.4 percent), and marine fish 276 (33.9 percent). India was our largest supplier, mainly with the products shrimp and tuna, taking up a proportion of 34 percent. The second largest was Taiwan with 7 percent, followed by Norway with 6 percent.
Difficulties in both input material and quality control at the market’s output distorted the picture of seafood export in 2014. It has slowly revealed a paradox in the fisheries sector where fast growth was not proportional to profits for farmers and processors.
Facing many challenges
In 2015, the Vietnam seafood industry aims to export US$8.5 billion. According to Deputy Minister of Agriculture and Rural Development Vu Van Tam, the biggest challenge in this year is the market. The greater the level of integration, the more challenges seafood enterprises have to face. With a series of trade agreements expected to be adopted in 2015, such as: the Trans-Pacific Partnership (TPP), the free trade agreements with European countries, the Eurasian Customs Union, with South Korea and Asean, doors to potential markets will be wide open. However it also comes with challenges such as competition on price and quality, technical barriers, especially in ensuring food safety. Additionally, seafood export in 2015 faces the risk of being greatly influenced by current market factors such as oil prices falling sharply, the Japanese yen’s depreciation, which could lead to a rise in import price, affecting consumers.
However, obstacles for the fisheries sector in 2015 come not only from the integration. The internal problems of the industry for many years, yet to be resolved, also present a major hindrance to the development of the industry; that is the use of chemicals, antibiotics and banned substances in aquaculture and processing; the high post-harvest losses; the slow innovation in production organizations, weak collaboration and cooperation among fishing, aquaculture, processing and consumption.
At the General Conference reviewing the fishery sector in 2014 and planning for 2015, the Minister of Agriculture and Rural Development directed fisheries sector to focus on solving urgent problems of the sector (problems of market, diseases); tightening the quality management of seafood breeds, inputs, aquatic veterinary medicine; controlling food safety and hygiene; strengthening the capacity of fisheries inspection system; adjusting infrastructure, building systems of production organisation and human resource training.
The determination of fishery sector in 2015 is essential in order to achieve the growth target. As a leading expert on seafood market, Mr Nguyen Huu Dung forecast that the total seafood export of Vietnam in 2015 would reach US$8 billion, US$0.5 billion lower than the target set by the Ministry of Agriculture and Rural Development.
Source: VCCI
Share: Facebook Twitter Google Buzz Myspace MSN Live Yahoo LinkedIn Orkut Digg Delicious